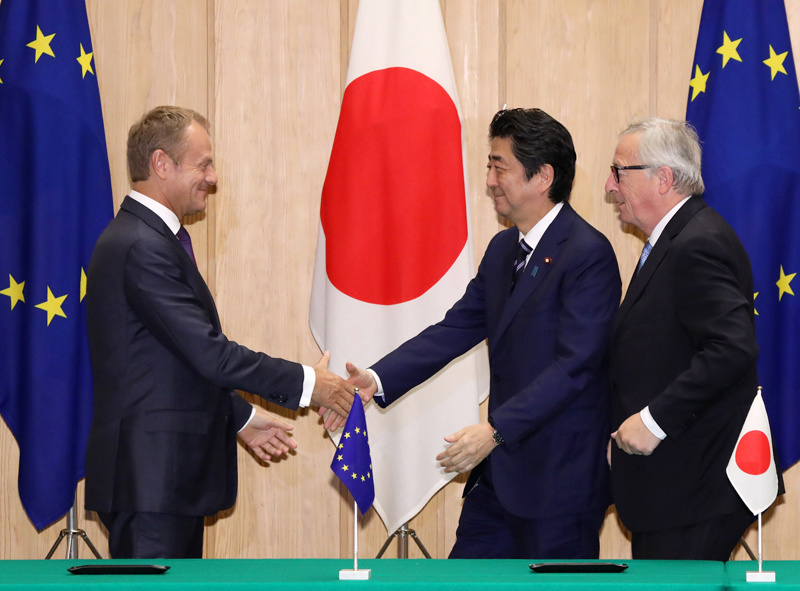 After five years of negotiations, the European Parliament has approved a major trade agreement between the European Union and Japan. The EU-Japan Economic Partnership Agreement is to enter into force in February 2019 and will create the biggest free trade area in the world.

T he agreement will remove almost all customs duties, creating a trading zone of over 600 million people and covering a third of the global GDP and about 40 percent of international trade. EU-based companies stand to pay around €1 billion less in customs duties each year in the future. Moreover, the agreement will remove various regulatory barriers that are currently in place, such as for exporting vehicles to Japan.

Remaining tariff lines will be subject to partial liberalisation through tariff-rate quotas or tariff reductions.

Boon for food and beverage industries

The largest winner of the trade agreement is the agricultural sector of the EU. While some food products such as rice are exempted from the agreement, the near 30-percent tax rate on European cheeses will be removed. Moreover, the agreement also covers other food products such as wine and spirits, which are currently taxed at 15 per cent on average. European wine exports to Japan are already worth around €1 billion and represent the EU’s second biggest agricultural export to Japan by value.

Over 200 European products and specific Japanese products with geographical indications will be protected under the agreement. This includes cheeses such as Gorgonzola, Brie de Meaux, Roquefort, Queso Manchego; meats such as Mortadella Bologna and Tiroler Speck; wines such as Prosecco; spirits such as Irish Whiskey; and other products, such as certain types of pastries. For Japan, the list covers products such as Kobe Beef, Japanese yam and Miyagi salmon.

The agreement will also remove tariffs in various industries, such as cosmetics, chemicals, plastics, clothing, and footwear. Furthermore, the trade agreement will commit both sides to uphold international standards on product safety and the protection of the environment.

European cars will be subject to the same requirements in the EU and Japan, and will not need to be tested and certified again when imported into Japan. In future, hydrogen-fuelled cars that are already approved in the EU can be exported to Japan without further alterations. In return, tariffs for Japanese car imports to Europe are to be successively abolished over the next seven years.

The agreement will not only facilitate the export of European cars to Japan, it will also open services markets, from telecommunications to financial services and e-commerce, to EU companies and enable European companies to participate in public procurement markets in 54 Japanese cities. State-owned enterprises in Japan will no longer be allowed to treat EU companies, services or products differently to their Japanese counterparts when buying and selling on commercial markets.

The text also includes an accelerated dispute settlement between the two sides similar to the one agreed under the EU-South Korea trade agreement.

For the EU, the agreement with Japan, a country that has been historically isolated, showcases the negotiating power that the Union holds.

The deal sets higher labour and safety standards, in addition to environmental and consumer protection. In the field of sanitary and phytosanitary measures, it creates a more predictable regulatory environment for EU products exported to Japan, according to the European Commission.

The EU and Japan also agreed to simplify approval and clearance processes. Import procedures are to be completed without unnecessary delays, thus ensuring that undue bureaucracy does not put a spanner in the works for exporters.

Moreover, the deal commits both sides to the Paris Agreement to combat climate change, the first time the latter is used as a legal framework for environmental standards. 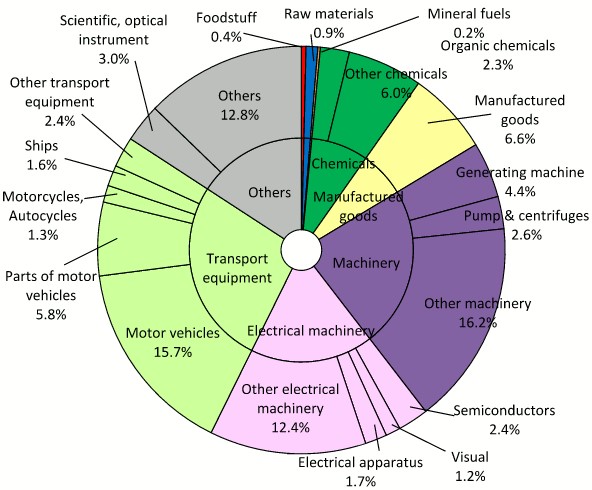 Japanese exports to the EU in 2017

Freer movement of services and people

The EU exports some €28 billion of services to Japan each year. The agreement will make it easier for EU firms to provide services on the highly lucrative Japanese market. It will, however, not force governments to privatise or deregulate any public service at national or local level. Likewise, EU countries’ authorities retain the right to bring back to the public sector any privately provided services.

In telecommunications, the agreement includes provisions focused on establishing a level playing field for service providers and on issues such as universal service obligations, number portability, mobile roaming and confidentiality of communications. Rules regarding financial services are mostly are based on those developed under the World Trade Organisation.

The trade deal aims to promote investment between the EU and Japan, but the text explicitly reaffirms the right of each side to regulate. The agreement does not cover the protection of investment, on which negotiations are ongoing. The EU has proposed to Japan a modified proposal on the Investment Court System, rejecting any return to the old-style Investor to State Dispute Settlement System (ISDS).

On data protection, the European Commission and the Japanese government reached a conclusion last July to move forward with the adoption of a so-called “mutual adequacy” arrangement, which will create the world’s largest area of safe transfers of data.

For the first time, an EU-negotiated trade agreement will include a chapter on corporate governance. It is based on the G20/OECD’s Principles on Corporate Governance and aims to reflect the EU’s and Japan’s best practices and rules in this area. Both parties commit themselves to adhere to principles and objectives such as transparency and disclosure of information on publicly listed companies; accountability of the management towards shareholders; responsible decision-making based on an objective and independent standpoint; effective and fair exercise of shareholders’ rights; and transparency and fairness in takeover transactions.

The European Parliament also approved the EU-Japan Strategic Partnership Agreement, whose aim it is to deepen EU-Japan relations on topics of mutual interest, such as human rights, foreign and security policy, climate change, energy, labour issues and social affairs. It is set to include an anti-fraud clause to make it possible for the EU to withdraw tariff preferences in cases of fraud or a refusal to co-operate. The aim is to prevent abuse of preferential tariff treatment. This agreement must be ratified by all EU member states before entering into force.

An analysis by the European Commission’s Directorate-General for Trade sees the agreement as achieving a high degree of trade liberalisation. It is expected to add €33 billion to the EU GDP by 2035. The analysis also notes that the sectors that benefit the most, such as agriculture and clothing, are areas which usually do not benefit the most from EU trade policies. A large number of EU exporters to Japan are small or medium-sized businesses, which also stand to gain.

The free-trade agreement will come into force on 1 February 2019. Due to its scale, it will be interesting to see how the disruption of both markets will affect the parties. For Japan, a large influx of European products from food items to industrial materials, in addition to the participation in the procurement markets, could foster stiffer domestic competition. On the flip side, Japanese car manufacturers will certainly become a potent force in the European market.

Employer Branding: Strategies to recruit the next generation of lawyers

Diversity in the workplace: Boon or distraction?