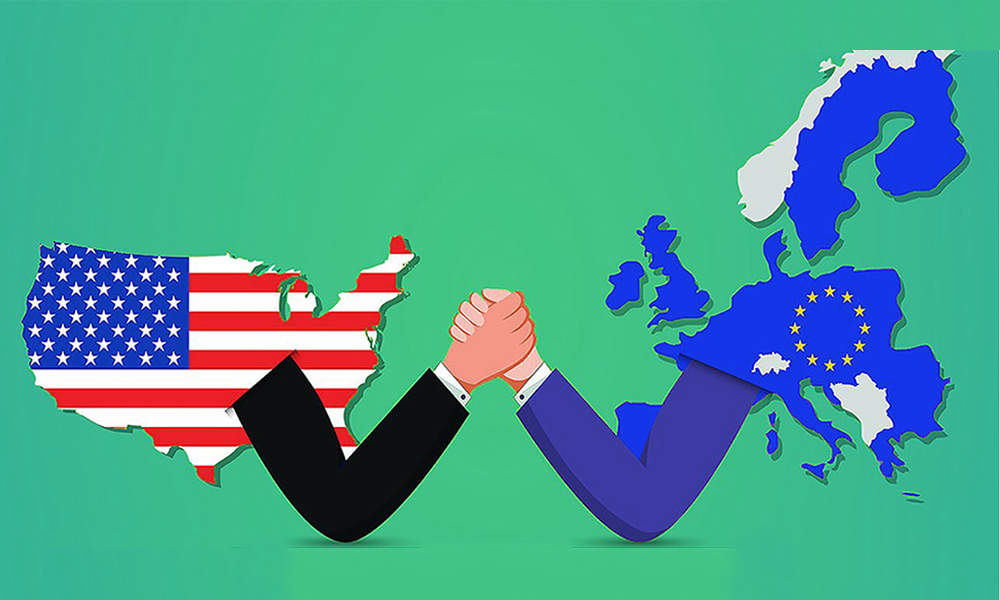 President Donald Trump’s decision to exit the Iran nuclear deal and US pressure on other Western nations to abandon trading with Iran has raised the stakes in transatlantic trade relations.

What some see as President Trump’s protectionist-inspired ‘dollar dictation’ on the trade front has rather set the cat among the European pigeons – though others would point out the ensuing debates Trump’s stance has provoked are long overdue.

But the US president’s decision to ‘exit’ the Iran nuclear deal, while also pressuring other Western nations by applying secondary sanctions to anyone continuing to trade with the Tehran regime, has raised the stakes considerably higher. There’s a whiff of defiance in the air, and transatlantic tensions threaten to blur the distinction between enemies and friends.

So what problems do European companies face in an international trading environment many now perceive to be a legal minefield devoid of risk-free options?

Cornelius Adebahr, associate fellow of the German Council on Foreign Relations as well as the Alfred von Oppenheim Center for European Policy Studies, points out that the present day transatlantic trade disputes “are less about the details of commerce and financing than about political authority over trade.”

But whether you blame Trump’s ‘America First’ trade strategy or just believe the WTO international trade rules are no longer fit for purpose, there is little doubt that Trump’s threat, in early March, to impose tariffs on EU steel imports went down badly in Europe.

In fairness, Trump is hardly the first American politician to express annoyance at the US-EU trade imbalance. However, his insistence the situation threatened his country’s ‘national security’ sparked anger in Brussels, with Europeans branding the Trump administration’s actions protectionist – and therefore illegal – giving the EU a right to retaliate in kind.

But with that earlier trade dispute still simmering, the 71-year-old American president stunned the world in early May by announcing the US was abandoning the Iran nuclear deal (the Joint Comprehensive Plan of Action), and would reimpose sanctions on that country.

“From the U.S. perspective, the dispute is more about JCPOA non-compliance than trade,” adding that “it seems likely the dispute rests more on the U.S.’s actual desire to put economic pressure on Iran than as a means to alter Europe’s trade practices.”

Even so, America’s warning that harsh secondary sanctions would be used to penalise foreign firms trading with Iran has had serious consequences for many businesses with investments in Iran. While US multinationals such as Boeing and General Electric are already planning to leave, and European concerns such as Total, Daimler and Siemens indicating they will follow suit, others are not so sure.

The Italian engineering firm Ansaldo Energia, which has traded in Iran for 70 years, hopes to stay, and Volkswagen has yet to announce its decision. India’s Bharat Petroleum Corp is equally unsure about the future, but is currently profiting from bargain-basement deals on Iranian oil.

Meanwhile, Chinese companies show little inclination to withdraw, and remain well positioned to fill any trade vacuum created by the departure of multinationals.

The US sanctions will not only realise another of Trump’s campaign pledges, they will also damage Iran’s economy as well as Europe’s own investment and trade relations with this influential Islamic state. Nevertheless, there is some doubt how successful these moves will be in restricting Europe’s economic ties with Iran.

As the US reinstated sanctions, the EU countered on the same day with a ‘blocking statute’ intended to protect European companies with Iranian interests from the effects of America’s punitive action. Federica Mogherini, the EU’s foreign policy chief, even called on European companies to respond to the American boycott by intensifying Iranian business.

These blocking regulations include business-friendly protective measures, which companies will appreciate, as well as penalties for infringement, which will certainly be less welcome. A further political motivation for such retaliatory action is that the EU – and JCPOA participants Germany, France and the UK in particular – intend to honour their commitment to the agreement, and hope to persuade Iran to do likewise.

In September 2018, Mogherini announced at the United Nations in New York that the EU would set up a new payment mechanism to allow countries to transact with Iran while avoiding U.S. sanctions. Called a ‘special purpose vehicle’ (SPV), this mechanism would aim to “assist and reassure economic operators pursuing legitimate business with Iran,” according to a joint statement released by the remaining members of the Iran nuclear deal, France, Britain, Germany, Russia and China.

“This will mean that EU member states will set up a legal entity to facilitate legitimate financial transactions with Iran and this will allow European companies to continue to trade with Iran in accordance with European Union law and could be open to other partners in the world,” Mogherini told the UN General Assembly.

The details of this SPV are currently being worked out by experts. However, analysts already doubt the viability of the plan, arguing that while the SPV would establish a clearer financial channel to trade with Tehran, it is unlikely to protect participating companies from U.S. secondary sanctions.

At a practical level, the US measures introduced in May included a wind-down period of 90 days. From 7 August 2018, American sanctions were imposed on:

Further and more extensive sanctions are to follow in November.

From the other side of the Atlantic, Olga Torres sketches a potential problem the EU legislation may encounter: “The EU ‘blocking statute’ is difficult to enforce in practice. This is not the first time the EU has attempted to block extraterritorial economic sanctions imposed by the U.S. For example, the blocking statute has been applied to the U.S. embargo against Cuba, but it has had minimum effect on the embargo,” she says.

EU companies will take little comfort from what she predicts could be the consequences of non-compliance: “It is unlikely that the Department of Treasury Office of Foreign Assets Control, or OFAC, the agency that administers U.S. economic sanctions programs, would even consider the European blocking statute as a mitigating factor in deciding whether to impose penalties in enforcement cases (this has been the case with respect to the Cuba/blocking statute discussed above).”

So, caught in regulatory transatlantic crossfire, EU businesses dealing with Iran and the US must seemingly choose between exposure to US sanctions or prosecution for breach of EU regulations. Nevertheless, observers are unsure of whether such rules will actually enforced.

“Much of the debate centres on payment channels that are autonomous from US authorities. While the Belgian-based company SWIFT can be sanctioned for dealing with Iranian banks, this is less likely for a special purpose vehicle involving the central banks of EU member states, thus avoiding any direct link between private actors and their Iranian counterparts.”

And looking closely at the guidance accompanying the EU’s blocking statute, experts believe there are two areas which could potentially offer a pathway through these difficulties.

With more stringent sanctions due to take effect in November, there is yet time for further diplomacy to intervene. However, in the interim, and faced with the conflicting demands of two powerful regulators, it is clearly in the interests of European companies who are considering winding up business operations in Iran to carefully document their strategic reasons for doing so.