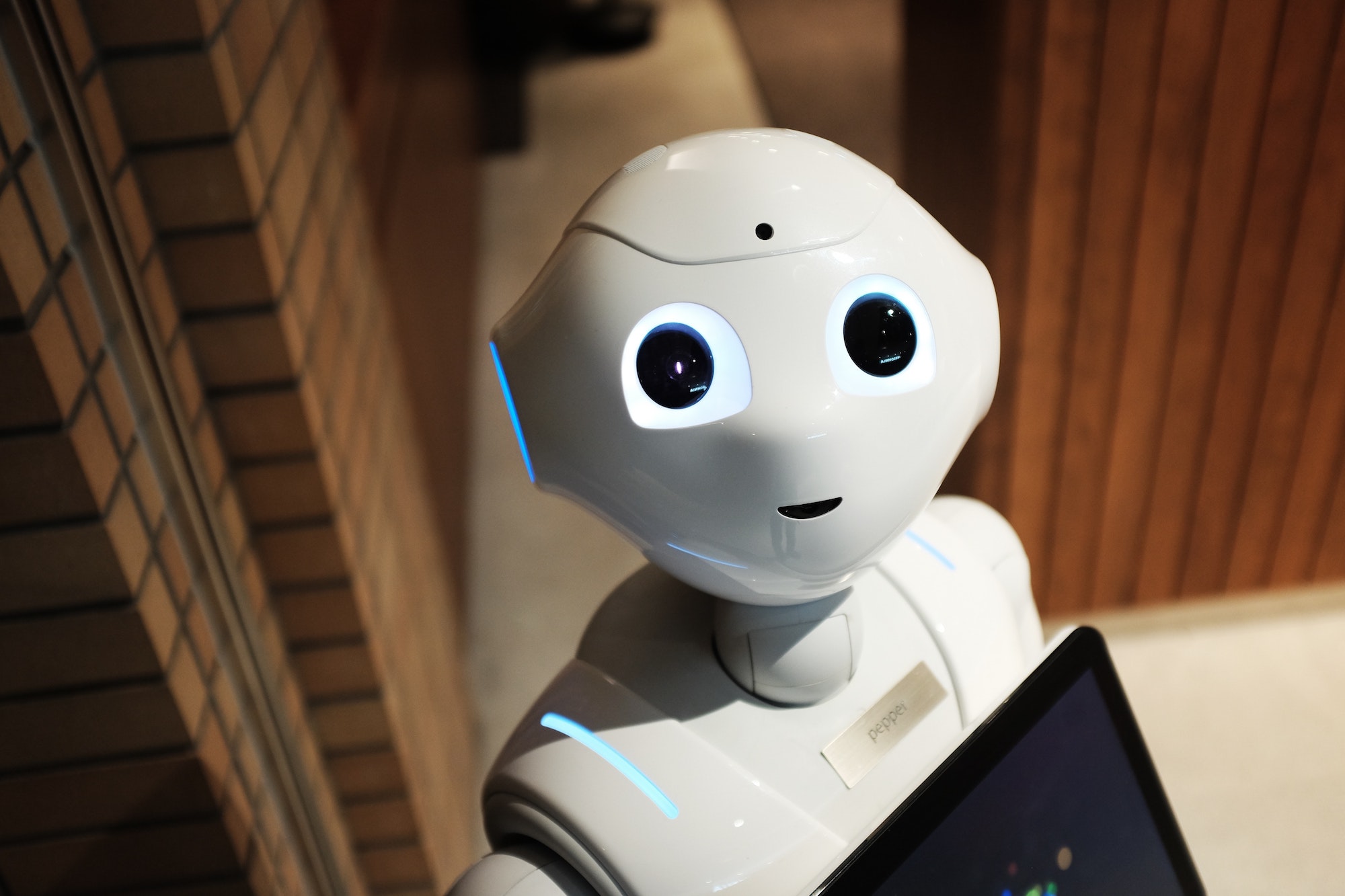 From mid-August to mid-November 2019, ECLA distributed a comprehensive 13-question survey to high-level company lawyers across Europe. The goal was to approach in-house counsel from a variety of sectors and industries, with a particular emphasis on the heads of legal departments, as decisions on legal technology are generally made on that level. Legal Departments in a Digital Era, an in-depth overview of the digital status of legal departments in Europe, conducted by ECLA and Wolters Kluwer is based on this survey.

The digital revolution has made its way to legal departments. Though the legal profession can definitely be considered more conservative and less open to change than some other sectors, there is no doubt that in-house lawyers can immensely benefit from new-age solutions and will hopefully embrace the changes that the transformation process can offer. However, the question where to actually being such an endeavour is always a daunting task.

One of the unequivocal truths is to learn from the experience and mistakes of others. Looking how colleagues and peers have fared across the World in different sectors could give a better indication of how to start one’s own assessment. Not only should it be established, what specific processes and solutions to focus on, but also to understand what the general outlook amongst colleagues towards these legal technology tools is. There are countless examples throughout history where very promising solutions did not gain a footing purely due to a lack of proper communication and support.

Regarding the digitalisation of legal departments across Europe, an optimal starting point could thus be at the very beginning – to understand whether these legal departments actually see implementing legal technology as an approach to increase their day-to-day and departmental efficiency as a whole or not. This would give some insight into how strongly corporate lawyers believe in the adoption of new technological solutions into their work stream.

One should also bear in mind the position that legal departments are in their companies. It is by and large seen as a necessary cost to the whole company, with the expenses that lawyers and outside counsel can incur. This entails that for the majority of businesses, any investment made to legal should clearly drive down the cost of the department not only long-term, but also short-term. This restricts the choices that legal departments have regarding any potential investments into solutions.

In the survey, participants were given a statement to either agree or disagree with. The statement raises the notion that in order for a corporate legal department to increase the value that they can deliver in the most efficient way, an organisation must have a strategy in place to structure formal processes and must adopt technology suitable for their needs to support such processes. 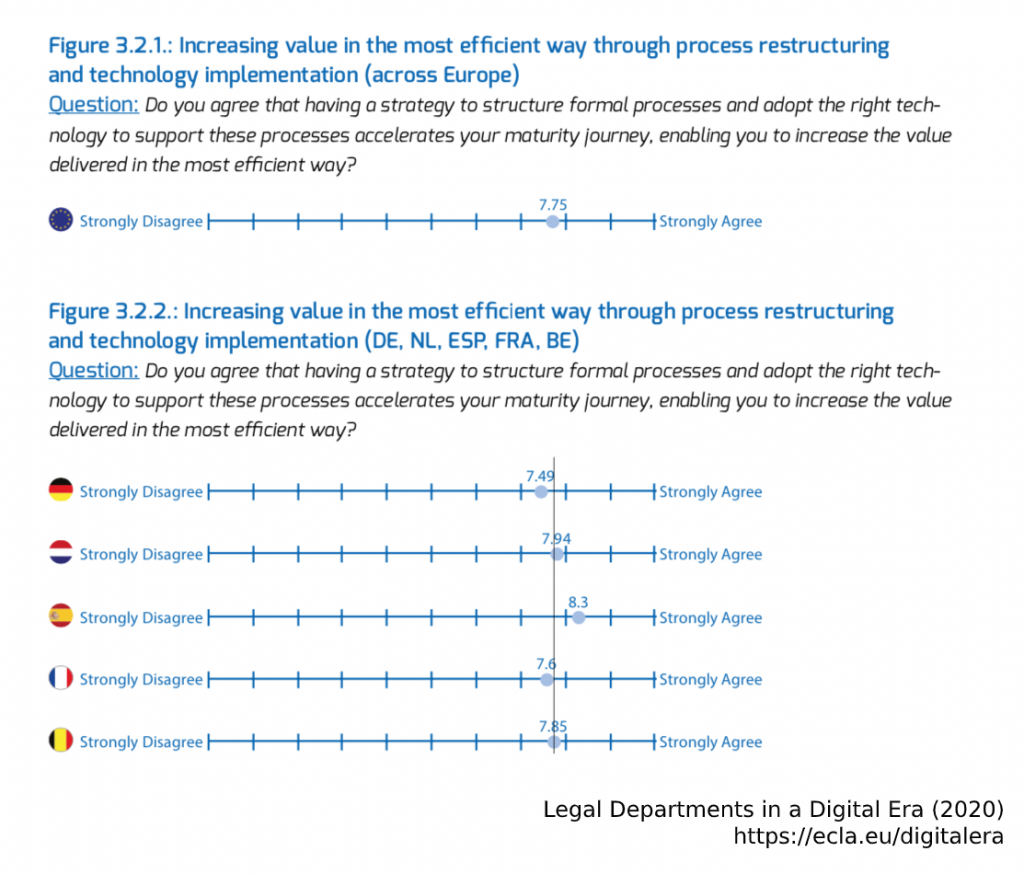 Respondents across Europe are inclined to agree with the statement, albeit not strongly. On a scale of 1 to 10, with 1 indicating strong disagreement and 10 indicating strong agreement, legal departments account for an average of 7,75, indicating agreement with the statement. This would entail that there is not a universal enthusiasm towards the adoption of legal technology solutions, though the belief that implementing such solutions would be a net benefit still clearly exists.

This entails that corporate lawyers across Europe see having a strategy in place, supported by technology, for organising work processes as beneficial to the organisation and is something all corporate legal departments should consider approaching. This viewpoint is supported across Europe, with little to no derogation between the surveyed countries, further deepening the notion that this is a general agreement amongst corporate lawyers. The largest gap between Germany and Spain is still under 10%.

Given the overall agreement across Europe, it is at least evident that legal departments see legal technology as being beneficial and as the way to increase the value that the department delivers. The score however does not demonstrate universal agreement however, indicating that there is some disagreement as to whether this approach will enable legal departments to increase the value that they can deliver in the most efficient way.

Nevertheless, scepticism in just one in five legal departments should be seen as a positive thing. Dissenting opinions will always exist. The fact that nearly four out of five legal departments already consider implementing legal technology and structuring processes as an approach to increase value in the most efficient way when the legal technology market has yet to mature is certainly hopeful. 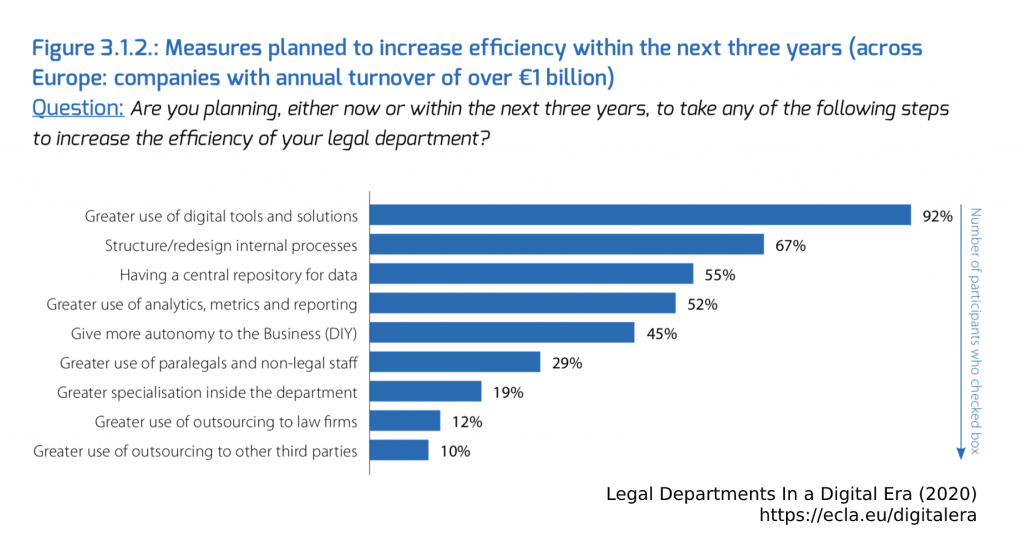 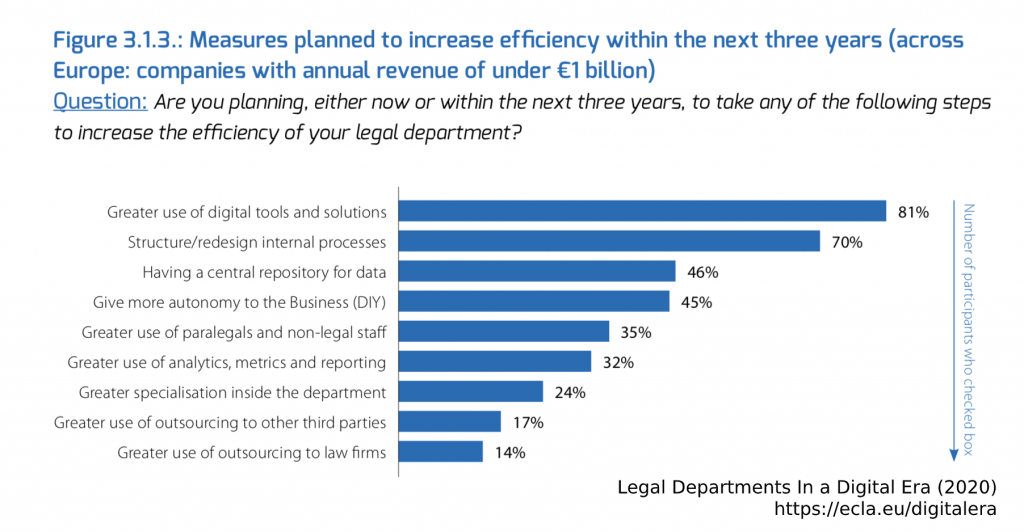 The COVID-19 pandemic has certainly accelerated the process towards digitalisation. The study was conducted prior to the outbreak, leading certain aspects that would facilitate seamless remote working have certainly been thrusted into the forefront. It would certainly be interesting to see how the outlook of legal departments has changed over 2020, what actually has been prioritised and whether improvements have been fast-tracked or shelved indefinitely due to cost.