Activist investors, who have primarily operated in the U.S. in the past, have now set their sights on Europe. The study Investor Activism by CLI – Corporate Legal Insights and CMS Hasche Sigle shows that in some areas, companies are significantly underestimating the threat.

IInvestor activism has been a well-known stock market phenomenon in the U.S. for decades, manifesting itself in two very different ways. On the one hand, there are the short sellers, whose success depends on a falling share price. Shareholders who invest in a company, on the other hand, exercise their membership rights in an attempt to influence the strategic decisions made in a stock corporation with the objective of increasing the value of its shares.

Due to increasingly strict U.S. compliance regulations, U.S.-based investors are looking for European companies to a great extent as targets for their activities. According to German newspaper Frankfurter Allgemeine Zeitung in spring 2018, activist investors had “conducted around 120 campaigns against companies in Europe in the past twelve months, which is almost twice as many as five years earlier ؎ and the trend is rising.” 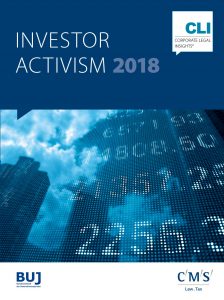 One of the key findings of the study, for which CLI contacted 160 companies and surveyed 102 legal departments of stock corporations, is that more than one in three companies has already been subject to heightened investor activities, and two thirds of companies surveyed anticipate these activities to increase.

Factors that make stock companies particularly vulnerable include: frequently low attendance rates at general meetings, the increasing influence of consultants on share voting rights, and the pronounced protection of minorities under stock corporation law. These aspects make it easier for activist shareholders to influence voting in connection with general meetings. Also, only two out of five respondents (38.20%) in the study could state with confidence that they have a developed strategy in place to counter the activities of activist investors at an early stage. 25.60% are currently planning a strategy. This means that nearly two-thirds of companies are currently defenseless against potential attacks by activist investors.

What action can be taken against these disciples of quick profit, who unabashedly take advantage of companies for selfish purposes? In addition to stricter disclosure requirements for investors and the fight against “fake news”, which also includes unfounded smear campaigns against companies, are there other ways to strengthen the defences of stock corporations?

Recent developments in artificial intelligence (AI), more precisely in the area of pattern prediction or predictive analytics, could provide support. This is because both the activities of activist shareholders, who are interested in increasing stock market prices, and short sellers, who speculate on the opposite, demonstrate regular patterns. By consistently analysing stock market events and the media, especially social media, these activities can be traced and predications can be made. An example of this would be an equity long/short strategy securitised by certificates where shares for the long and short sides are selected on the basis of predictive analytics. The composition of the long and short positions for a certificate of this kind is based on forecast models for the individual shares. These models take into account the historical series for share rates and other capital market relevant data. It is no great stretch of the imagination to get from here to activist investors. There is certainly a reason why large corporations such as Google, Facebook, and Microsoft have declared artificial intelligence research to be one of the most important strategic directions of their own corporate development.